Serang Kim, 40, from Seoul, South Korea, is a painter, sculptor, figure artist, military advisor for film and art director for music video.  With all that on his plate he somehow finds the time to make probably some of the bext custom figures today.

First, let me start by saying that your work is phenomonal. I noticed from your blog that you're an established artist.  Is that correct? How did you get into working in 1/6 scale?

I am an artist for sure, but I am not quite sure if I can call myself an “established artist”.

I’ve worked in many different fields and, probably the most significant career I had so far was being a chief editor, writer and publisher for a plastic model magazine named “Hobbist-Neo” for more than 15 years.

I became a pretty well-known plastic modeler in my teens and twenties, but after I won multiple awards in prestigious international model fairs, suddenly I lost my motivation and drive which made me successful in my field.

Making the situation worse, my health failed miserably and I had to fight against my ill condition for many years.

After my slow recovery, I tried to find a new field that can ignite my engine again. 1/6 scale was the answer I found.  Since I had worked in much smaller scale plastic models, 1/6 scale felt like a huge canvas that I can express my imagination in a more free and detailed way.

When creating these works of art, do you work alone or with a team?

Basically, I work alone.  I do my planning, researching and designing by myself. I almost always build my own figures and prototypes alone.

However, there are few artists who I collaborate with when I need to do computer generated 3D-modelings for mechanical works and/or some high level costume works. I still prefer working alone, but in reality I have to think about efficiency and quality of the work, too. 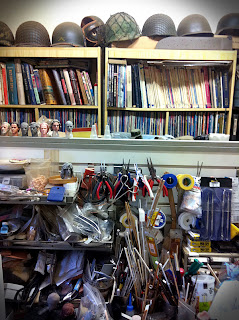 Your earlier work consisted of fan favorites, such as "Saving Private Ryan" and "Platoon". You then moved off to characters that most fans probably would not have considered, characters like "House" and "Spartacus".  How did these come about?

When I decided to work in 1/6 scale, I gave myself a theme for all of my works “ambivalence of people”.  Then I think about suitable characters for the theme. Even though I utilized “fan favorite” characters, it is not in the viewpoint of fans, but it is a tool to express the theme in my mind.

For example, Captain Miller was both soldier and school teacher. Characters in "Platoon", "Dr.House" and "Spartacus" also were fine examples of human ambiguity.  Probably people would never find out the criteria of my works until I reveal it, but I’ve always selected characters that fit my theme.

You really excited your fans with your "Oldies But Goodies" (OBG) series. Your first offering, if I'm correct, was The Beatles.  Out of their many looks, how did you decide on the two looks you chose, Original and ?

The first work of my OBG series was "Camera Man-James Dean".  Sir Winston Churchill was the second.

After years of being young super stars, they finally became real musicians with their own philosophy and individual lives.

It was too bad that it was their last regular album together, but paradoxically it was the time when each member of The Beatles was in their artistic prime.  Of course, their Guru-like appearances with long hair and beard were also very interesting to me.
The original look version of The Beatles was a fan service because there are many fans who have different tastes from mine. 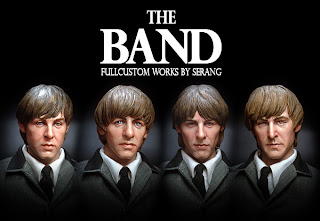 Next in the series, was the guitar god himself, Jimi Hendix. I must say, this is probably one of your most amazing figures.  What was the process of creating a figure like this? How difficult was it to find the reference material for his outfits?

Being a "radio-generation" person, I’ve been a fan of Rock and Pop music of the western hemisphere.  However due to the fact that I was born and raised in , I was not familiar with the works of Jimi Hendrix until recently.

After I bumped into Jimi’s live performance video last year by chance,  I instatly became a huge fan of his music.  I studied not just his music and concert videos, but his life story and philosophy.

When I build a 1/6 scale figure, normally I collect about 1 to 2 thousands photographs for each character and I analyze and study those materials before I start to build the figure.
For Jimi’s costume, I studied much more images. I captured frame by frame from Jimi’s HD Live videos, especially for the details of his costume’s side and back. 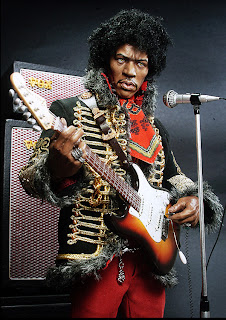 You then went to a more classical figure and gave us Ludwig von Beethoven.  Being that there no actual photos of the man, how challenging was it to get the correct likeness?

I never try to make a copy of a few selected photos of the character.  It is a principle I have when I work on any figures.
If I try to build a copy of one image of any character that figure won’t reflect the overall look and feel of that character or the life of the character.

When I build a figure, I research and study the character thoroughly and construct my own image of the character which is often very independent from that character’s publically known images.  In Beethoven’s case, luckily both his life-mask and death-mask are still existing.  In fact, almost all sculptures and portraits of him has been based on them.

For Ludwig’s figure, I studied numberless copies of his sculptures and portraits that I could find and I constructed my own image of Beethoven based on his music, life and historical background.

Just like Jimi Hendrix, you included an extra headsculpt showing the character in a more "emotion filled state".  How did this idea come about?

Anyone who has watched any of his live performance videos will have to agree that not only Jimi’s vocal and guitar play, but also his facial expression and every single motion on the stage were huge parts of his musical performance.

Most collectors and buyers of the Jimi’s figure are used to a “passport-photo” like empty expression of factory made figures. When I decided to build the Handrix figure I really wanted to reproduce his soulful facial expression on live stage which later turned in to  “Voodoo version" head sculpt.

Recently, I found that few factories are using similar system with their Batman line ups. LOL! 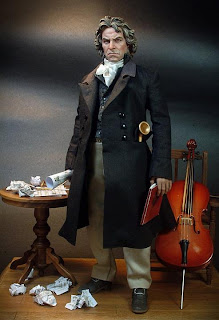 Your latest figure in the OBG Series is Vincent Van Gogh.  This figure is truly a work of art.  Everything from the incredible likeness down to the paintbox and easel.  Is it safe to say that this has been your most challenging figure?

In a purely technical point of view, Jimi Handrix was the most challenging one.  In the case of Vincent Van Gogh, his publically fixed image was the real challenge.

Since photo records of Gogh do not exist, most people recognize Van Gogh by his famous self-portraits.  This means that most people have a false impression of him with a hobo-like appearance and overly distorted face which symbolizes his unstable mental state.  If I construct Vincent’s portrait in a 3-dimensional form straight up it will be demon-like monstrous figure.

I know that apart from his miserable life, Vincent was one of the most passionate and intense artists of all time.  Fortunately, I had a chance to enjoy the actual works of Van Gogh and I could feel his volcanic-like intensity from his brush touches on canvas.
Thinking back to that special moment of my memories, I really wanted to express his flamboyant passion for art rather than his pitiful daily life. I made every little part of Vincent Van Gogh figure to build that image in my head. 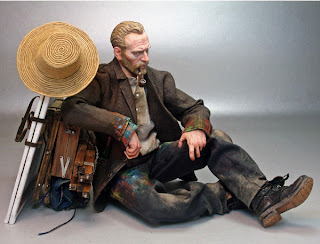 Changing the subject a bit, I see from your blog that you also have a passion of motorcycles. How did you get into motorcycles?

In my teen years, I was a junior-class amateur motocross rider.  Since I was very young boy, I was in love with motorcycles.

When I was in junior year in high school, I was badly injured during a motocross tournament and I had to retire from being a contest rider.  Even after the accident I still rode motorcycles until my early college years.  I then quit riding for about 10 years after I entering my mandatory military service.  Ten years later, when I was in a long home-recuperation after my retirement from the magazine work, my love for motorcycle suddenly reappeared.

You have an amazing bike. It looks like something out of an anime!  Did you design it?  Tell me about it.

Yes, I designed it.  More accurately, it was a collaborative work with an artist named “D Hwang”.  I wanted build a bike that reflect my uneasy, unusual life.  At that time the image I had for my life was something heavy and rough, but powerful enough to penetrate through any obstacles.  I built that bike for 3 months and rode all around for 10 days. 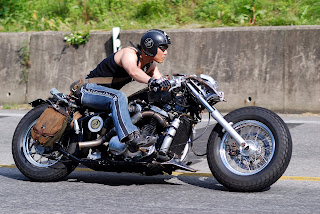 Now that you've completed Van Gogh, who is next in the OBG Series?

My next OBG project will be Jimmy Page, the guitarist in Led Zeppelin.  I am already working on Jimmy Page and it will be done in few months.

After Jimmy Page, I am planning to work on the most important project of this year, Admiral Yi Sun-Sin (1545 - 1598).  Admiral Yi Sun-Sin was a legendary Korean naval hero who was well respected by many famous admirals and war historians around world including Admiral H. Nelson.

Japanese Samurais are already well-known characters around the world, but Korean warriors who fought and won the Japanese invasion do not have the same level of recognition.

2012 is the 420th anniversary of the Japanese Invasion of Korea in 1592.  I want to recognize Admiral Yi’s strategic and tactical brilliance during the Invasion. 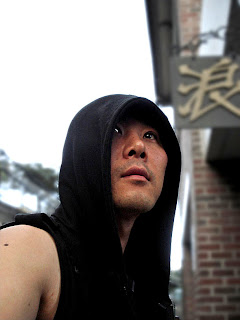 To see more of Serang Kim's amazing work, go to SERANG WORLD.﻿
Posted by mistertoy1 at 9:28 AM